“Anger - How It Affects Children and Parents” (Show #7)

What is anger? What's going on inside of us when it happens and how can we teach ourselves and our kids to regulate anger? Learn how parent anger can impact kids and practical things that can be done to help children understand their own anger...and the uncontrolled anger of others in their environment.
Go to www.ParentPumpRadio.com to get to know more about Gretchen and Jacque as well as leaving your questions, comments and suggestions for future shows.  Be sure to sign up for our free gifts and follow us on social media.
Go to www.MissionsRadio.org to listen to all our podcast and subscribe to our feed so you will be automatically notified of new shows.
Share | Download

TO INTRODUCE YOU TO THE RAW STORIES OF REAL PEOPLE WHO LOST ALL REASON BEFORE ULTIMATELY FINDING THE TRUE MEANING OF LIFE. WE ENCOURAGE YOU NOT ONLY TO LISTEN TO THE STORIES BUT TO SHARE THE STORIES WITH OTHERS WHO MAY BE FIGHTING SIMILAR BATTLES.

The purpose of The Darkest Hour is to introduce you to others, who have climbed out of their ditch and found the true meaning of life. We encourage you, to not only listen to these stories, but to share these stories with others who may be fighting similar battles.

Franklin Shares an exclusive with us about a new film coming out in Aprl 2017, that you are going to want to hear and make sure you go and watch...So, You will want to listen in on this one.

Santagate will be responsible to develop and implement the strategies for church and ministry engagement with the objective of expanding the Pure Flix reach and impact both domestically and internationally. He will oversee the growth and operations of regional teams poised to increase group ticket sales.

Santagate recently served as director for the nonprofit Marketplace Network in Modesto, California. 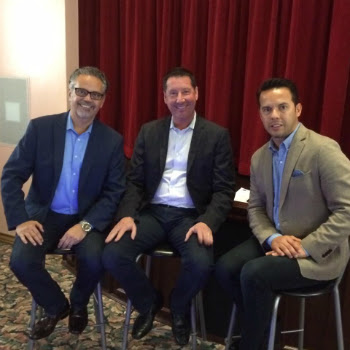 Although Latinos purchase 25 percent of all movie tickets sold, recent studies show that Latino community is one of the least represented population segments in speaking roles in film and television; in 2015, there was only one Latino-centric film released by a major studio.
"Hispanics engage movies more than any other ethnic group in America; however, there is this issue with the content and depictions of the Latino community that has not been well-represented," said Rev. Rodriguez. "We aren't all gang bangers. We're not all narco-traffickers from Latin America. We are God-fearing, hard-working people. This alliance will expose our community and engage us in a way we've never been able to before."
The organizations have committed to a long-term exclusive strategic alliance for five years that aligns common vision, influence, assets and resources to develop faith and family media. Pure Flix and NHCLC hope that this partnership increases the presence of Hispanic themes, actors, directors and stories in the film and entertainment industry.
One key aspect of the partnership will develop internships for Latinos seeking to learn all aspects of the industry.
"We want people that have the core values and the love and hope of Christ infiltrated all through the industry because then that transformed leader or individual will be a transformation agent in the culture," said Fedyski.
Additionally,initiatives included in this alliance are:
For full details and an archived version of the Facebook Live video, visit. https://www.facebook.com/PureFlix/videos/1497412636942009/.
Pure Flix is a Christian movie studio that produces, distributes and acquires Christ-centered movies with a vision to influence the global culture for Christ through media, and a mission to be the world leader in producing and distributing faith and family media. For additional information, visit http://pureflixstudio.com/about-us/.
NHCLC/CONEL serves as a representative voice for the more than 100 million Hispanic Evangelicals assembled in over 40,000 U.S. churches and hundreds of thousands of additional congregations spread worldwide throughout the Spanish-speaking diaspora. For additional information, visit http://www.nhclc.org.
Share | Download

We talk with Guy Hatcher about his book entittled "Your Future Reflection, How to Create a Legacy Beyond Money" a powerful book not just about estate planning and the importance of it, but also, leaving a heritage and how to move into what God is calling your family into and for what purpose. Find out more by going to the website here and begin your Family Core Value Assessment.

Another wonderful interview with Dr. Tom Phillips of the Billy Graham Association, author of the new book "Jesus Now Awakening" This is a must have book for your library and to know that God is doing something now, not just in America but around the world. Please share with others..They need to hear this.

I speak with Dr. Doug Stringer on his new book "Leadership Awakening" as we discuss the different aspects of leaderships, how it is derived, what does God say about leadership and how do people move into such roles within their church and communities.

Kneeling bedside at 2 a.m. after election results were in, I tearfully thanked God and gave Him the glory for what just happened. The final text I received said it poignantly: "It feels like the thawing in Narnia when springtime returned."

Indulge me for a moment to describe it in dramatic yet honest terms. I, like multitudes, was euphoric and found sleep extremely challenging! May this unprecedented event remain aglow on the photographic plate of our minds to encourage us for years to come.

We literally witnessed a modern day political miracle. This was, without question, an astonishing once-in-a-lifetime occurrence. I still have to pinch myself that I'm not dreaming!

"Whoa, Larry! Aren't you getting a bit carried away?"

Not at all! And in case you retired early or decided to avoid the evening's developments for whatever the reason, allow me to highlight five aspects of Nov. 8, 2016, that will forever remain in the annals of political history as absolutely phenomenal.

What if you felt called to do something that seemed like a completely impossible undertaking given the limited amount of time and resources you had?

Texas-based custom home builder, Dan Wallrath experienced this first hand in 2005 when asked to help a stranger who needed his home remodeled so he and his wife could take care of their son, a U.S. Marine Core Lance Cpl. who had sustained severe head injuries from an IED explosion while serving his first tour of duty in Iraq. Without the funds, and with no real plan, Dan said yes to this desperate father, completing the family’s home renovations a few months later.

Soon after, Operation FINALLY HOME was born as a 501C3 nonprofit organization with a mission to build homes for wounded, ill or injured veterans, surviving spouses and their families.

Building Hope: What Happens When God Changes Our Plans to Accomplish His is the story of Dan’s journey as he followed his call to serve America’s military heroes, starting with a team of one and growing to lead one of the nation’s most respected non-profit organizations serving U.S. veterans. This inspirational memoir reveals how stepping out in faith turned into a lifetime commitment to build homes for those who have sacrificed while wearing America’s uniform in defense of our freedoms and our way of life.

Parent Pump Radio - “Mixed Messages -Saying “NO” To My Child….What Does It Really Mean?

There's something about the word "No" that feels subversively "off" or flawed - especially when it’s used too often with children and teens. Learn the impact this word has on your child's developing brain as well as how it makes them think, feel and perceive themselves and their abilities. Discover useful alternatives, which promote empowerment instead of limitations. For more parenting information on this subject check out these links.  How to Tell My Child No...Without Saying No; "Developing The Conscious Child".

Go to www.ParentPumpRadio.com to get to know more about Gretchen Downey and Jacqueline T.D. Huynh as well as leaving your questions, comments and suggestions for future shows.  Be sure to sign up for our free gifts and follow us on social media.

"And now, the end is near

And so I face the final curtain

My friend, I'll say it clear

I'll state my case, of which I'm certain."

So sang Frank Sinatra in his classic song, "My Way." Closing arguments were submitted then came the verdict.

This is where America is at as the end is near for Election 2016.

CBS News said, "82% of Americans are disgusted with the presidential campaign." I opine the political situation is the result of the reckoning of eight years of incompetent, deceptive and uncooperative leadership that has brought us to a breaking point and this epochal moment.

I offer the following, fully aware that Trump's "Make America Great Again," pro-growth, reform agenda is laden with his glaring personal flaws. But as the Wall Street Journal stated in their editorial Saturday (11/5/16), "The case for Donald Trump is political disruption. A broken Washington needs to be shaken up and refocused on the public good, and who better to do it than an outsider beholden to neither political party?"